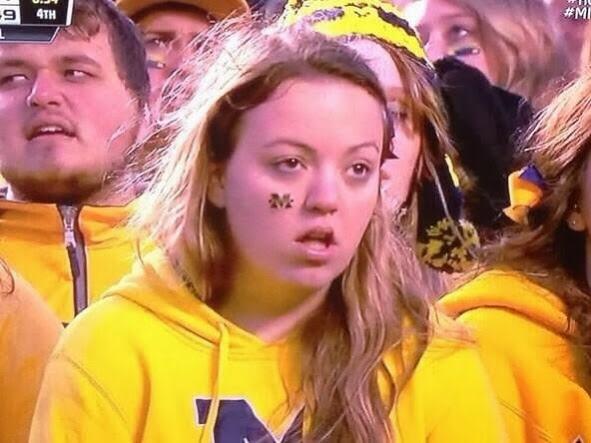 I’m ready to talk about Michigan football after giving it almost 10 days to marinate about what happened in Columbus. It was ugly, it was disappointing, it was embarrassing, and it wasn’t fun. It officially killed everything that Michigan football wants to be. They are no longer my father’s Michigan. National Title aspirations can never be the hope again. This loss officially confirmed that we are now the Wisconsin or Iowa of the B1G Ten East. We should aim for a B1G Championship appearance and the Rose Bowl. From here on out it would be foolish to have a “CFP or Bust” mentality as long as the last game of the year is against Ohio State. Some of my fellow Michigan fans will disagree with me. I want to be with them. I want to think there is a chance every season to make some national noise simply because “We are Michigan Football, 11 time National Champions”. Well, the last title came in the 90’s and since the turn of the century Michigan has only beaten Ohio State three (3) times. If they couldn’t beat them this year, I honestly don’t know what it would take to beat them. Ohio State has our number. Harbaugh isn’t great against rivals. Those are just facts. Cant argue with them. As for what happened a couple Saturdays ago, there is plenty of blame to go around.

Obviously the defense was the most shocking part of the failed venture into The Horseshoe. I saw plenty of scenarios where Michigan could lose the game, but the defense having the worst performance in Michigan Football history was not one of them. Giving up 62 points seemed impossible the way the Michigan defense had played under Brown the last 2 seasons. To me, it all started with the defensive line. That has been the strong point and calling card of the Michigan defense. When Gary, Winovich, and the rest of the crew were neutralized at the line of scrimmage, the rest of the team was exposed. Especially corner back Brandon Watson. If he played horribly, that would have been an upgrade over the performance that was turned in. The linebackers were constantly being burnt on running back wheel routes and, as mentioned in the preview by me, the secondary just simply wasn’t fast enough to keep up with the OSU wide outs. I thought that the secondary would be able to hold their own because I thought that Michigan had a superior advantage in the trenches. I was wrong, the defense was torched, and my hope for the future was lost.

The offense was not blameless. Despite putting up 39 points, the offense failed every time they were needed. Deep into the 3rd quarter it was an 8-point game and the defense had come up with multiple stops. An offensive score there potentially changes the story of the game. Gentry is the first player that comes to mind when thinking of the offensive ineptitude. He dropped a sure fire touchdown and a few big first down opportunities. Higdon was exposed for not being fast, Evans was exposed as not being strong (even though he would have given the running game the best chance that day, in my opinion), the offensive line was porous, and Shea proved to many that he is not ready for the NFL. The players under performed, but that wasn’t my biggest issue with the offense.

Now we are on to the coaching staff. Don Brown failed to adjust his game plan for what seemed like the first time in his tenure as DC. But, despite having a historically horrific day, I give him a pass. Not a pass for the game, but a pass for the future. I truly believe he will make the right adjustments going forward and wont be caught like he was that fateful Saturday ever again. Jim Harbaugh and the offensive coaching staff is a completely different story. Let me get this out there now, I do NOT want Michigan and Jim Harbaugh to separate paths. I think Jim is the best possible guy for the situation. That being said, RUN AN OFFENSE THAT IS NEWER THAN 1984. The game plan for this years’ game was absolutely pathetic. We continued to try and pound the rock, run play action, and huddle up despite being down two scores in the 4th quarter. The correct game plan against Ohio State’s defense was to go down field, something we never attempted to do, and to use speed, another thing we never attempted to do. Why were there no plays designed to get the ball into the hands of Tarik Black? Maryland scored 52 points basically running jet sweeps and Hail Marys and we didn’t attempt one of those. The ground and pound offense works against the Purdues and Marylands of the B1G Ten. Not against Ohio. Why was the game plan for the biggest game in the last 12 years of Michigan football the exact same as when Michigan won the National Title in 1948?  No creativity and inside the box thinking lead to another ass-whooping at the hands of Ohio State. I don’t know why, but I honestly thought that Harbaugh and Pep Hamilton (Maryland, please hire him) would look at what had worked against OSU all year and done something remotely similar to that. Don’t try to tell me that Michigan doesn’t have the athletes to do it. Don’t lie to yourself and think that Michigan doesn’t have the players to do it but Purdue and Maryland do. I understand the game plan of clock control, wearing them down, and having that pay dividends in the 4th quarter. But, when you find yourself in the middle of a shoot out, set down your hammer, pick up a gun, and give it hell. The one exciting drive Michigan had in the second half led to their only score that really mattered. The worst part about it is that the two games against OSU previous, I thought the coaching staff did an excellent job at game planning and that they just didn’t have the players to execute on offense. This year though, I’m not even sure if the coaching staff put together a game plan.

Its just sickening to see such an amazing season thrown away. 10-2 with a New Years 6 bowl is a great season any other year. But when you go in to the last game of the season against your bitter rival, with not only a B1G Ten Championship on the line, but also a College Football Playoff berth on the line, a NY6 bowl is a pretty shitty consolation prize. Now, I do want Michigan to beat Florida in the Peach Bowl. I would never want them to lose a game. It is just going to be tough to feel excited for it.