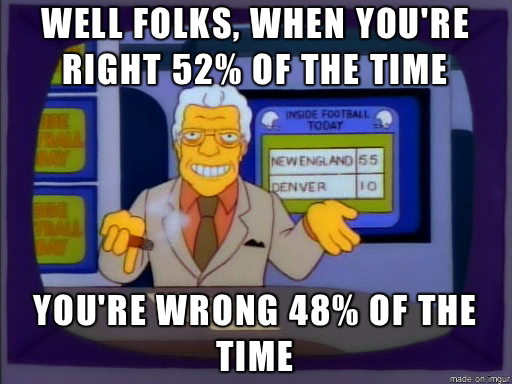 Through a philosophy degree, conversations with nerds, and recreational drug use, I have come to know the universe to be nothing more, or less, than math. We are all living, breathing bundles of probability with far too many inputs to comprehend. To process our existence as anything other than uncertainty, we construct narratives that constitute our best effort to assign concrete characteristics like responsibility and value. Too often, these narratives assume the role of truth in and of themselves, eroding objective, comprehensive understanding.

The dissonance between narrative and understanding is evident all around us, but is especially apparent in the world of sports, where legacies are shaped and destroyed with the fickle bounce of a ball. In a field with a well-documented shift toward data-based analysis, people still earn six figure salaries to parse through what it all means, and arithmophobic voices usually overwhelm the rest.

For all the differences between Jose Altuve and Andrew Romine, the difference between the two amounts to about one hit every two games. A Steph Curry 3-point try draws rapturous gasps while Stanley Johnson’s induce groans, but Steph only makes about one more every ten tries. Of course, Curry and Altuve also add value in less perceptible ways that we are just beginning to measure. Over the course of an entire season or career, these percentage points add up to tangible wins. But on a game-by-game basis they are relatively insignificant.

On a football field, because there are 22 individual moving parts with an essential role in every play, a clear disparity between teams will usually lead to a lopsided game. The multiplicative nature of probability means that, over 70 plays in any given game, teams with massive, freakishly skilled linemen, roving terrors for linebackers, and a preponderance of talent at skill positions will be mostly immune to consequences from individual mistakes against overmatched foes. With some notable exceptions, these teams are also led by some of the sharpest minds in sports, who put their players in positions to win more battles than not.

Of course, a coach earns no plaudits when his gameplan adds 10 points to a blowout win, just as players don’t win Heismans against non-conference cupcakes. Athletes and coaches are rightfully judged on their ability to execute against their peers, when their supporting casts cannot easily paper over individual errors. The cruel irony of it all is that even teams that win the majority of their individual battles and have superior strategies do not always come out on top. Football games are finite equations that you do not get to run until everything regresses to the mean. Sometimes, your quarterback has the worst game of his life while everyone else plays over their heads, costing a chance for a season-vindicating upset. Sometimes, you get boned by the one of the most ridiculously arbitrary judgments in sports. Sometimes, your punter has trouble with the snap. Sometimes, improbable shit happens, and when it happens repeatedly in the situations with the highest possible leverage, you end up where Michigan stands today: the butt of Buckeye and Spartan jokes.

The odds certainly seem to be in favor of a Michigan resurgence next season. They’re a young team brimming with talent and, hey, Don Brown’s still around. While nothing is guaranteed, it is likely that offensive line and QB play will improve because, well, how could it not? But even if Michigan entered South Bend, East Lansing, and Columbus with a 60% chance to win each game (odds any Michigan fan would gladly accept), there would still be a chance they’d lose all three. I hope that Michigan can take steps to minimize fortune’s role in their record, but it is entirely possible that Michigan will continue to be an unlucky football team under Jim Harbaugh, through no fault of his own. It is possible, albeit unlikely, that a well-oiled machine might conk out at the worst possible moments, again. Many have come to expect it. With years of matchups against Mark Dantonio, James Franklin, Urban Meyer, and Brian Kelly ahead, all we have as fans is the hope that Harbaugh’s proverbial coin quits coming up tails. And I have no clue whether it will.